What is Morton's neuroma and how to treat it

Morton’s disease or Morton’s neuroma is a common foot condition. It affects three women to one man and is characterised by pain in the forefoot. It usually affects the area between the third and fourth toe; however, it can sometimes affect the space between the second and third toe.

Nerves located between the metatarsals under the foot provide sensitivity to the toes. These inter-metatarsal nerves are branches of the medial and lateral plantar nerves. They separate at each of the metatarsal heads to provide innervating branches to each toe. The nerve located between the third and fourth metatarsal is the direct junction (anastomosis) of the lateral and medial plantar nerve and therefore seems to be less mobile and more easily injured. 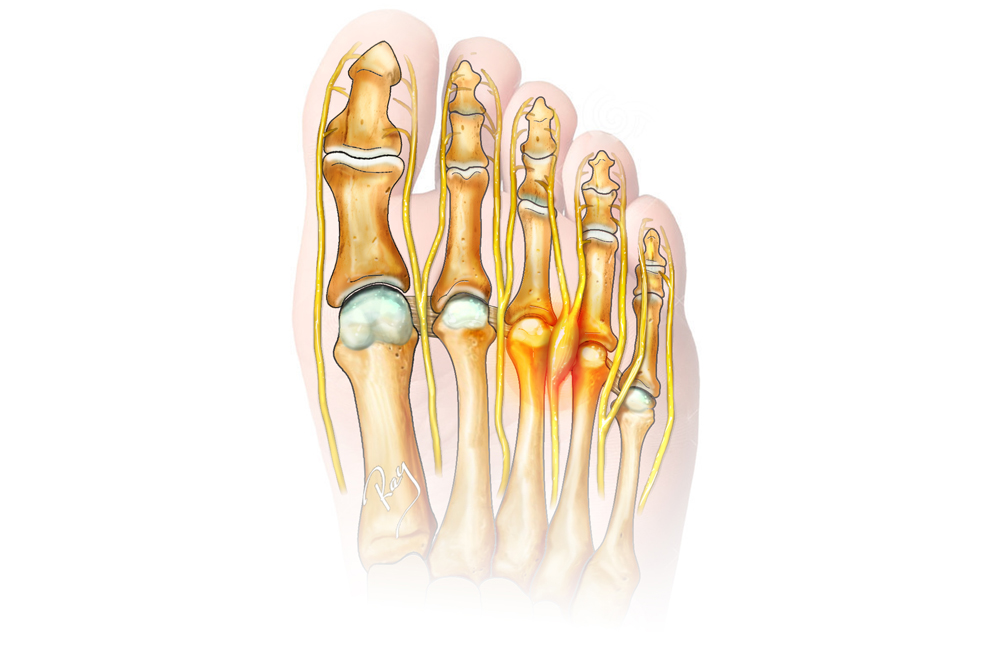 This condition has long been considered as pseudo-tumour lesion (neuroma) of an unknown cause. It would appear, however, that it is a canalicular problem in common with conditions such as carpal tunnel syndrome. The nerve actually passes through a fixed canal bordered by the metatarsals on each side and by the two intermetatarsal ligaments on the surface and below. Any reduction of this canal (oedema due to inflammation, narrow foot, etc.) compresses the contents, including the nerve and it may suffer chronic damage. After a certain time, the structure of the nerve itself will change and thicken. The notion of a pseudo-tumour, observed in histopathology examinations, is a consequence of this thickening. The condition should be described as a compressive canal syndrome affecting the third space; it is not a neuroma.

The condition always relates to pain under and between the heads of the third and fourth metatarsals. Patients generally describe the sensation of electrical burns or a loss of sensitivity in the same toes. When significant thickening of the nerve is observed, the painful passage of the nerve on each side of the metatarsals can be palpated (= Mulder’s sign). This sign increases when compressing the foot.

The pain increases significantly when wearing narrow shoes, as they increase the compression of the canal.

It is very important to differentiate a true Morton’s syndrome and pain under the metatarsal heads (metatarsalgia). This last condition is much more common and a Morton’s neuroma is often diagnosed incorrectly. The correct diagnosis is only possible following an accurate and specific clinical examination.

An ultrasound or an MRI generally completes the examination to determine the size and exact location of the injury.

When should you consult a specialist?

If you experience chronic pain under the metatarsal heads or feel electric currents in the toes, consultation with a specialist is advisable.

It is important to note that the longer the condition has existed, the lower the chance of the treatment succeeding.

Do you have any questions or would you like to see a specialist?